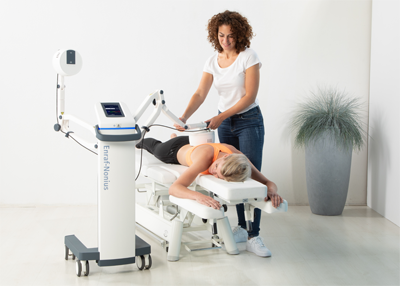 Pulsed ShortWave Therapy is a form of high-frequency electrotherapy using oscillations with a frequency of 27.12 x 106 Hz. This corresponds to a wavelength of 11.06 metres in a vacuum. Waves with a length of between 10 and 100 meters are now referred to as 'short waves'. The more traditional name of 'ultra-short waves' is, in fact, incorrect. The most appropriate term for the waves used in this type of therapy would be '11 -meter waves'. The frequency of the oscillations has been established by international agreement (first reached at Atlantic City in 1947) in order to prevent interference with other forms of RF transmission.

PSWT employs the same operating frequency as traditional SWD ie. 27.12MHz. The output from the machine is pulsed such that the ‘on’ time is considerably shorter than the ‘off’ time, thus the mean power delivered to the patient is relatively low even though the peak power (i.e. during the on pulses) can be quite high (typically around 150 – 200 Watts peak power with modern machines, though some still go up to 1000W).
The control offered by the machine will enable the user to vary (a) the mean power delivered to the patient and (b) the pulsing parameters governing the mode of delivery of the energy. It would seem from current research that the mean power is probably the most important parameter.

How does it work?

It is believed that the response of biological systems to electromagnetic energy could be the result of either thermal or ‘athermal’ effects. The heat developing in the tissues after 20 minutes of application of SWT was found to peak at 15 minutes, after which it levelled off for 5 minutes and then started to decline slowly at a rate of around 1 per 5 minutes (Draper et al 1999, Valtonen et al 1973). Therapeutically, a temperature increase of more than 1°C is useful for mild inflammation and an increase between 2 and 3°C is helpful in reducing pain and muscle spasm, whereas an increase of 3–4°C is necessary to cause changes in tissue extensibility (Lehmann 1990, Prentice & Draper 2001). The demonstrated changes in cell behaviour were found to be reversible immediately on termination of application if the increase in temperature was less than 1°C (Michaelson & Elson 1996, Tenforde 1996).

The primary effects of the pulsed magnetic field appears to be at the cell membrane level & is concerned with the transport of ions across the membrane. Some interesting publications have strongly supported the ‘non thermal’ effects at cell membrane level (Luben 1997, Cleary 1997).

Where does it work?

There appears to be a strong similarity in the mechanism of effect of ultrasound, laser and pulsed shortwave – all three modalities appear to have their primary effect at cell membrane level, with the resulting ‘up regulation’ of cellular behaviour being the key to the therapeutic effects.
It is claimed that the applied energy has little or no effect on normal cells as `sick' cells respond to lower energy levels than normal cells.
The clinical effects of PSWT are primarily related to the inflammatory and repair phases in muscuoskeletal / soft tissues. The effects list is remarkably similar to that of ultrasound and laser therapy – which is not surprising given their probable common mode of action. The key difference in their clinical use relates to WHERE the energy is absorbed rather than the effects achieved.

Due to the pulsed nature of the energy, the device can very briefly transmit high peak power Watts, followed by relatively long periods of inaction. As a result, the patient’s tissue receives intense stimulation, although the therapy is very safe and comfortable for the patient
Bélanger uses the term Pulsed ShortWave Diathermy (PSWD) even though this includes both thermal and non-thermal effects 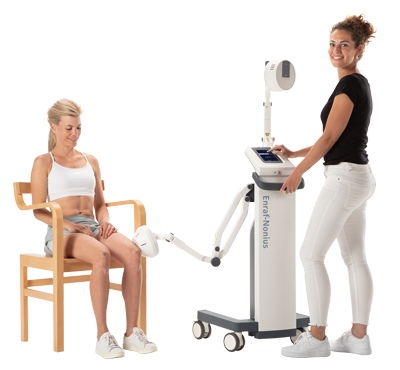 “There is growing evidence to suggest that over the past two decades, the use of PSWD may have surpassed CSWD as the delivery mode of choice.
A possible explanation for this shift may be that the application of PSWD, associated with less stray radiation, is safer for the operator (Tzima et al., 1994).
Another likely reason the use of PSWD is on the increase is because a much greater number of clinical studies have been published over the past years showing that low-wattage PSWD can induce a significant deep-heating response in human soft tissues.”

Guo et al. (2011) report on Pulsed RadioFrequent Energy which is exactly what PSWT is.

“PRFE is an effective, easy-to-administer treatment modality used in the adjunctive care of patients in numerous clinical areas.
It has been used in soft tissue as a palliative treatment for pain and edema (both postoperative and non-postoperative), and as an adjunctive wound healing therapeutic.
When used as directed, adverse side effects are rare. The treatment is non invasive, and can be applied locally to the target tissue.
In efficacy studies related to postoperative and non postoperative pain and edema, PRFE treatment has been reported to not only relieve pain and edema, but to facilitate faster recovery time and to reduce length of hospital stay, a notable benefit in an era of ever-increasing health care costs.
Its effectiveness at promoting the healing of difficult-to-heal wounds, such as diabetic and chronic wounds, makes it an important adjunctive wound healing treatment option, particularly for wounds non responsive to standard of care treatment.
With the number of patients presenting with diabetes on the rise, as well as a growing geriatric population, this is particularly noteworthy.
With its demonstrated efficacy in numerous clinical areas, limited risks, ease-of-use and relative low-cost, the clinical application of PRFE therapy is likely to become increasingly widespread in the years to come.”

In the Curapuls 670 this relationship between Peak Power, Pulse Frequency, Pulse duration and the effective Average Power is pre-defined and related tot the chronicity of the indication. This can range from acute (a-thermal) to chronic with a thermal component. This corresponds with the average power of the device. Curapuls 670 will automatically enter the correct values for parameters such as pulse duration, pulse frequency and peak power for you.
With its low-power settings , this device is exceptionally well suited to the (non-thermal) treatment of acute conditions. Recent large-scale research has shown that this method is particularly well suited to the relief of post-operative pain and the promotion of post-operative wound healing. However, the device can also be used to achieve thermal effects, as well. Even these higher levels of power can be safely administered, and they are very effective in the relief of pain caused by chronic conditions such as osteoarthritis. 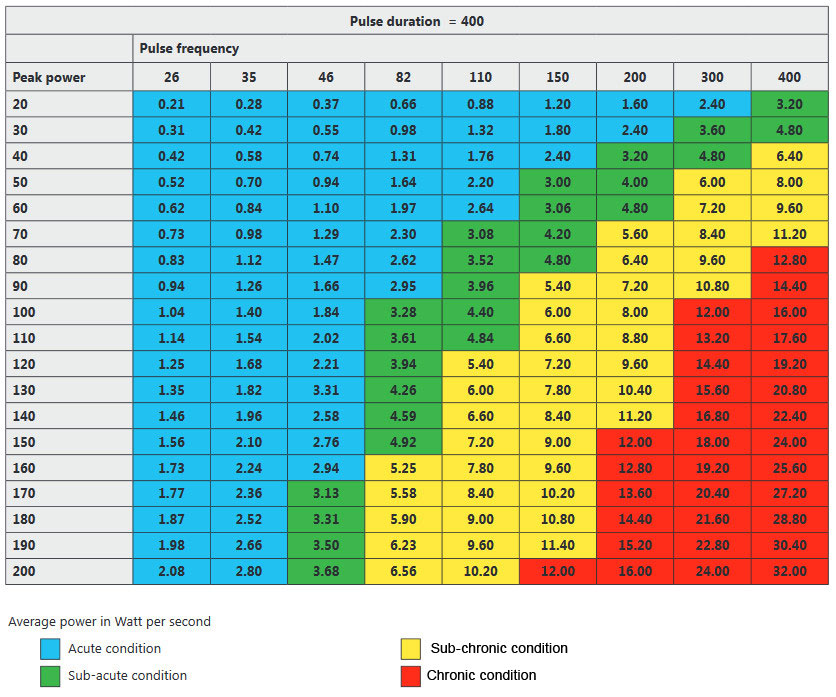 For more information please go to

It is concluded that Pulsed Shortwave Therapy was found to be effective for the following indications:

The CURAPULS MUST NOT be use during or for:

These indications and contra-indications originated from the Curapuls 670 Instruction for Use 1670750-42.

We use cookies on our website. Some of them are essential for the operation of the site, while others help us to improve this site and the user experience (tracking cookies).
You can decide for yourself whether you want to allow cookies or not.

Please note that if you reject them, you may not be able to use all the functionalities of the site.